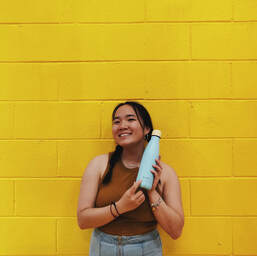 Alexis Ong, owner and founder
Alexis Ong has been in love with cake since she was a little girl. She grew up watching Duff Goldman on Ace of Cakes, helping her older sister make coconut macaroons, baking chocolate chip cookies with her cousin, and rifling through her aunt's box of dried royal icing roses.

It was in high school that Alexis's love for cake decorating really took off. She attended a beginner's decorating course hosted by her local craft store and has been addicted to the craft since. Later in her high school years, Alexis started to turn her little hobby into a career. She began selling her cakes to teachers and friends, and quickly, word spread. Alexis was soon referred to as "the girl who makes cakes!" By the time she was a senior in high school she was making two cakes a week.

After graduation, Alexis moved to New York City to attend the Parsons School of Design for communication design. She promptly left after one semester to follow her true passion for pastry arts. She immediately got a job as a decorator in a little cupcake bakery in the East Village called Butter Lane Bakery where she was one of two cake decorators in charge of all custom cake and cupcake orders. It was here where she honed her skills, improved her basics, and challenged her creativity.

While working, she attended the Institute of Culinary Education where she received a diploma in Pastry and Baking Arts and was awarded the Top Toque award for the highest academic achievement in her class. It was in culinary school where Alexis met her incredible mentor, Chef Penny Stankiewicz, founder and head of custom cake studio, Sugar Couture.

Alexis now lives in New York City where she continues to bake and create beautiful cakes and cookies for your special events. She is immensely grateful for every single one of her clients and supporters who have been with her on this crazy cake journey. Whether you have been here from the beginning or you're just finding out about us now, we are so grateful to have you in our community!